Socioperception is the ability to understand the changes in the environment and ecosystems. It uses the perception of weak signals, and is built on the acknowledgment of emotions, sensations and intuitions. Although not ‘visible’, weak signals are often announcing profound changes, hence allowing anticipation and adaptation. Weak signals can be perceived in the society or any organization, every day, in particular by being attentive and socioperceptive persons who will notice how they repeat and resonate.

Memory of the future

It represents the permanent link between the past and the future. French language has 2 different words : future and ‘à venir’ or avenir (‘to come’). The future already exists in the past and occur as a continuum. The future is usually envisaged from ‘logical’ successive events. But to envisage what is ’ à venir’ (to come), it is also important to consider the non-logical, unpredictable or irrational events.

They are defined as stories resulting mainly from socioperceptive persons working on elaborating future scenarios. Those should be opened to unexpected scenarios, hence allowing to adapt to important changes or metamorphosis. The future cannot be decided but scenarios of metamorphosis help to adapt. These open scenarios can be elaborated, for example, by gathering a group of diverse and ‘remarkable’ socioperceptive people spread out in the world, listening to weak signals. A limited number of open and evolving scenarios can help to “look at” the future.

The role of ordinary people in transforming the world
A. de Vulpian

Innovative ideas often come from ‘ordinary’ people. The role of a leader is not to rule but to catalyze all different ideas emitted by a group of ordinary people and create a consistent solutions. This new leadership and ‘democracy’ enable to facilitate and consider all points of views rather than promote selection or competition of ideas. This posture shall allow the emergence of glocal (local and global) and intergenerational democracies. New hybridization between local powers, associations, enterprises, and citizens contribute to foundation of the world transformation.

The fruitful emerging innovative ideas come also from ordinary people in a learning process mainly done by accommodation and adaptation rather than from experts. Reflective questions such as ‘how do you do what you do ?’  is one of the key questions that can build learning.  Tentative or groping strategy (‘stratégie tatonnante’) is a fruitful approach developed by A. de Vulpian. It can be blended with the development of observation of life in its regenerative process, moving away from the traditional educational approach.

Society and organization have the capacity to permanently regenerate, like many living organisms (autopoiesis). Life shows simultaneously purpose of survival, reproduction but also fulfilment at its pinnacle (A. Damasio). These objectives are pursued by a society and an organization as well.

Humanist metamorphosis can be based on “integral development (‘développement intégral’), learning networks and the sharing of Common Good. Education on Cooperation and socioperception are believed to promote an emerging and transformative soft power.

EDUCATION FOR A LIVING SYSTEM 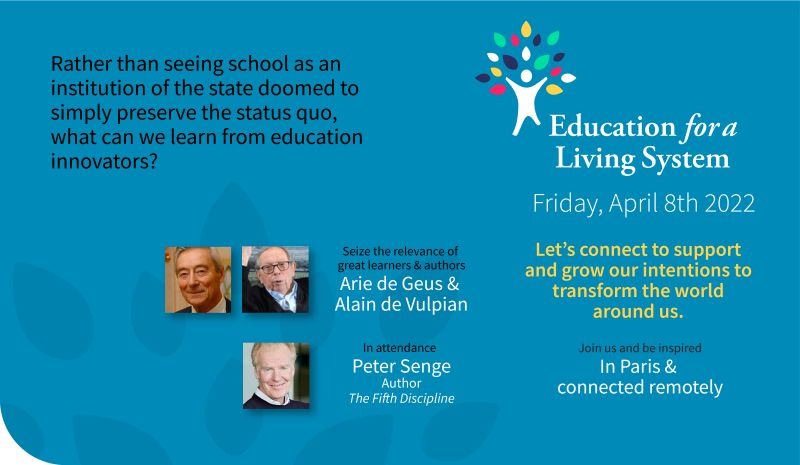 a tribute to alain de vulpian and his thoughts 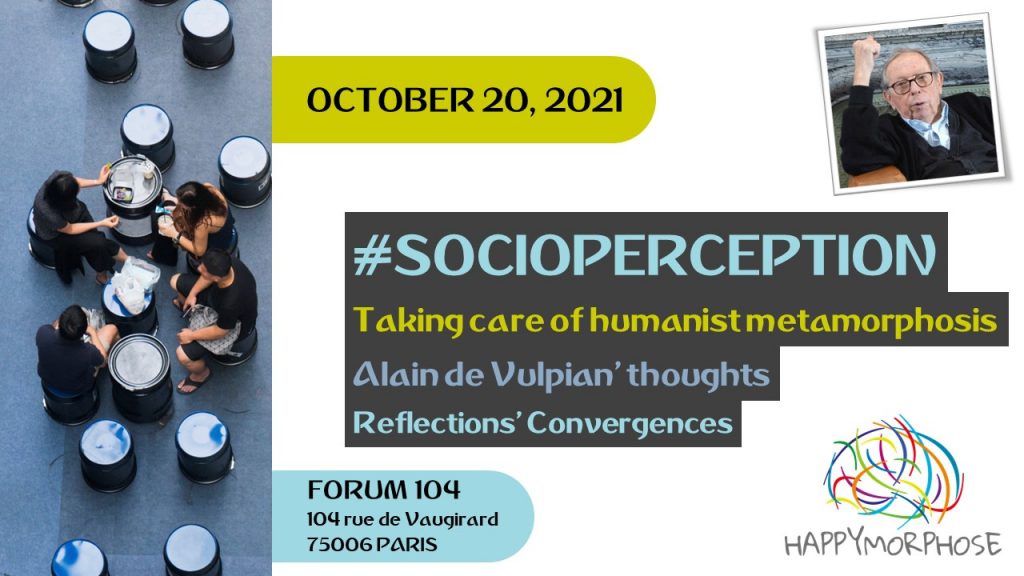 Mindsets and Actions for Sustainability

WHAT ARE WE LEARNING FROM THE PANDEMIC?
A pandemic at the crossroads of the “humanist metamorphosis”

WHAT ARE WE LEARNING FROM AMERICAN ELECTIONS?
Simplicity, Complexity, Simplexity

BEFORE AND AFTER PANDEMIA
How ordinary people… are transforming the world?

3pm: INTRODUCTION ROUND TABLE “the paradigm shift, the need for resilience and new practices of cooperation and training.”

Faced with the complexity of the crisis and the urgency we face in organising the resilience of our societies, there is an urgent need to bring out new actors, new mechanisms, new cooperations and new types of training.

At the point of bifurcation of our societies, and unlike the collapsology, the Happymorphose movement of which Irene Dupoux-Couturier is co-chair is the concrete expression in Research-action of a methodological optimist who can help take the creative paths of a future humanist.

Here is the full show offered by Le Cube, JD2 and Triple C

CONFERENCE "the humanist metamorphosis in organizations"

We celebrated the graduation of outgoing students with the Certificate in Innovative Management of Organizations and Care Networks at the Faculty of Economics and Social Sciences.
On this occasion the 2019/2020 programme was presented and Marie Christine Villagordo gave a lecture on “humanist metamorphosis in organizations”.
The evening ended in a festive way with a cocktail dinner at Namur University.

It was better... tomorrow - Humanist metamorphosis on march.

Lecture by Irene Dupoux-Couturier
on the book “Homo Sapiens, Collapse or Fulfillment”, she co-wrote with Alain de Vulpian

Organized by Global SoL
Around the book “Homo Sapiens, Collapse or Fulfillment”, with Irene Dupoux-Couturier

Evening at the Antoine bookstore in Versailles
around the book “Homo Sapiens, Collapse or Fulfillment” by Alain de Vulpian and Irene Dupoux Couturier with Gilles Poirieux

By Irene Dupoux-Couturier
On the occasion of the “SoL European Learning Plaza” in Budapest.

Meeting / dedication at the Eyrolles bookstore

around the book “Homo Sapiens, Collapse or Fulfillment”
with Irene Dupoux Couturier

"Becoming an actor in a humanist society" day 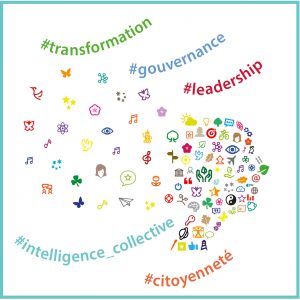 Organized in Lille, by Happymorphose, SoL France and the Catholic University of Lille.

In the metamorphosis booklet 7 (page 5): Some reflections and answers from
workshops held during this day as well as the account made by our Lebanese colleagues of the “accompanying workshop” they conducted in parallel to this Lille day, more focused on the situation in the Arab world and/or Lebanon.

“For a new European consciousness”
Europe’s role in the metamorphosis of world civilization.
Introducing Costas Stamatopoulos and Irene Dupoux-Couturier
In Paris 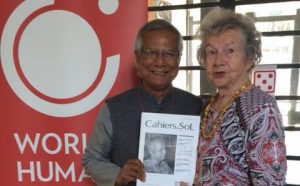 14 years after the publication of his interview in the Cahiers de SoL France, Muhammad Yunus with Irene Dupoux-Couturier.